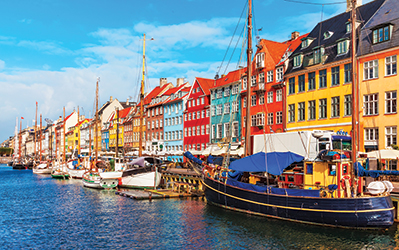 Are you travelling to Denmark?

You can get to Denmark from the Czech Republic aboard comfortable EuroCity trains with just one transfer in Hamburg.

By Train to Copenhagen

In the timetable 2016/2017 there are no direct train connections available from Czech Republic to Denmark. The best way to travel to Copenhagen from Prague is on a connection with transfer in Hamburg, for which you can purchase the affordable First Minute Europe to Denmark ticket using ČD e-shop or at ticket counters.

You can obtain more detailed information about the train journey to Denmark from our Search for a Connection page.

How Much to Denmark

For your trip to Denmark, you can use discounted First Minute Europe to Denmark tickets purchased through the ČD e-shop or at ticket counter. A ticket for one person from Prague to Copenhagen or from Prague to Aarhus (or in the reverse direction) on selected trains costs c. CZK 1,628 (EUR 59).

Complete offer for your trip to Denmark

Denmark is a developed Scandinavian country situated on the Jutland Peninsula and more than four hundred nearby islands. While its land border with Germany measures less than seventy kilometres, the total length of Denmark’s coast is roughly seven thousand kilometres. The country’s highest point is at an elevation of 171 metres above sea level, which is a mere 56 metres higher than the lowest point in the Czech Republic.

The capital has approximately half a million inhabitants and is situated on the island of Sjalland. It offers tourists an interesting intersection of history and the modern era. Here you can visit the idyllic Nyhavn waterfront or Amalienborg Palace, or you can have your picture taken at a nearby fortress with the famous statue of the Little Mermaid. You can easily return to the present, however, with a visit to the futuristic-looking building of the Copenhagen Opera, for example.

North of Copenhagen in the town of Helsingor is Kronborg Castle, where the Shakespearean drama Hamlet is set. You can get to this monument, called Elsinor in Shakespeare’s epic, aboard a suburban train comfortably. Those not seeking an answer to the question of “to be or not to be” can at least visit the Danish Technical Museum instead of Hamlet’s stomping grounds.

If you travel to Denmark with children, you can also visit Legoland, located in the town of Billund roughly in the middle of the Jutland Peninsula. The park is situated near the original Lego factory and was opened in 1968. In addition to a miniature world made from little blocks, it also offers a roller coaster and other attractions.