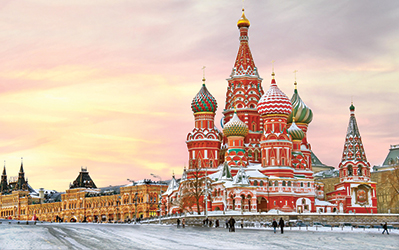 Are you travelling to Russia?

Take advantage of a comfortable direct connection in a sleeper carriage between Prague and Moscow.

To Moscow faster and in greater comfort!

Overnight train EN 404/405 “Vltava” sets off on its long journey Bohumín - Moscow two times per week in each direction and also pulls direct carriages to Prague. The train departs Prague in the evening and arrives in Moscow in the evening on the next day. In the opposite direction, it is possible to travel from Moscow in the morning with arrival in Prague in the morning on the next day.

You can obtain more detailed information about train journeys to Russia from our Search for a Connection page.

How Much to Russia

Complete offer for your trip to Russia

Russia is the largest country in the world and spans eleven time zones from eastern Europe across Asia to the Pacific Ocean. Due to the country’s size it has many different climates, ranging from polar to subtropical. Russia can boast undisturbed nature, seaside resorts, historic cities and monumental modern architecture.

Russia’s capital with its roughly 10 million inhabitants is one of Eurpoe’s largest cities. The first mentions of the city date from the 12th century. Moscow was the country’s capital from the 14th century until the beginning of the 18th century, and again after 1918. In Moscow, historical influences blend with modern architecture. Here you can admire traditional structures like the Kremlin, St. Basil’s Cathedral and the newly built Cathedral of Christ the Saviour, as well as modern buildings from the Soviet and post-Soviet eras – the Kotelnicheskaya Embankment Building, the Ostankino Tower and the group of high-rises making up the Moscow International Business Center.

It was founded only in 1703 by Tsar Peter the Great as the country’s new capital. Despite its youth, it abounds in important monuments, eclipsing many older cities. Saint Petersburg is considered one of Europe’s main cultural centres. The Peter and Paul Fortress, Nevsky Prospekt, the Winter Palace and the Russian cruiser Aurora are all worth visiting. The drawbridges on the Neva are also of interest, as they are raised each night to allow ships to pass from the Gulf of Finland to the country’s interior. If you visit the city during the summer, don’t forget to go outside in the late evening hours as well and experience the atmosphere of the so-called “white nights” when the sun sets on the horizon but, thanks to the city’s northerly position, it never gets completely dark.

The world’s longest rail line, known as the Trans-Siberian Railway, connects European Russia with Asia and the Pacific Ocean. It begins in Moscow and ends in Vladivostok, more than nine thousand kilometres away. The Railway was built between 1891 and 1916 and provided access to regions which were still unexplored even at that time. Modern trains make the trip from one end to the other in six to seven days. Of course if you wish to get to know places along the way the trip will certainly take you longer.