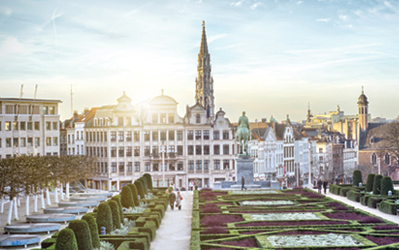 Are you travelling to Belgium?

By train to Brussels

Despite the fact that there is no direct connection in the 2019/2020 timetable between the Czech Republic and Belgium, you can travel in comfort from Prague, Ústí nad Labem or Plzeň to Brussels with transfers in Germany. For selected connections, it is possible to purchase the discounted First Minute Europe (Včasná jízdenka Evropa) ticket in the e-shop or at ticket counters. For example, from Prague Main Station (Praha hl.n.), you will depart in the late morning and after three transfers you will arrive in Brussels in the evening. You can return in a similar manner, with an afternoon arrival in Prague.

You can obtain more detailed information about train journeys to France from our Search for a Connection page.

From the Czech Republic to Belgium, we offer the discounted First Minute Europe (Včasná jízdenka Evropa) ticket. You can thus procure a ticket from Prague to Brussels for as little as c. CZK 1617 (EUR 59) for one direction.

Complete offer for your trip to Belgium

Ticket prices are set in EUR. The price in CZK may change according to the current exchange rate against the euro.

Belgium is a coastal country on the North Sea historically composed of two culturally distinct regions – Flanders and Wallonia. It borders the Netherlands, Germany, Luxembourg and France. The country’s capital is also the capital of the European Union and NATO.

Thanks to the many international institutions headquartered here, the capital city is markedly different from the rest of the country. Its symbols include a statue of a urinating boy and the Atomium. It is also worth visiting La Grand Place, Brussels’ main square considered the city’s historic centre.

This city of 100,000 nicknamed the “Venice of the North” can boast a network of canals connecting to the Reie River which give it a unique atmosphere. The city-centre is the historic Markt square with its large belfry on the south side. You can also visit some of its numerous museums and churches.

The country’s highest peak is located in the High Fens, a plateau region in the east of the country, and measures 694 m above sea level. In 1923, a six-metre “extension” with a staircase was built so that visitors could climb up to an elevation of 700 metres. In 1934, the peak was supplemented with a stone tower extending its elevation to 718 m above sea level.