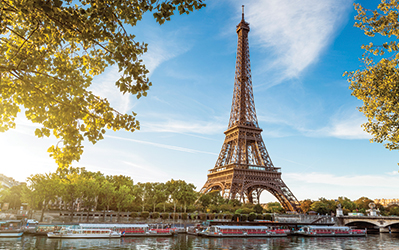 Are you travelling to France?

Take advantage of a fast connection to Paris with one transfer in Germany or in direct sleeper carriages to Nice with the option to board in Bohumín or Břeclav.

By Train to Paris

No direct train connection between the Czech Republic and Paris exists in the 2016/2017 timetable. The easiest variant is, for example, a journey with a transfer in Berlin or Mannheim. The fastest daytime connection, using the German Railways’ IC Bus from Prague to Mannheim and onward by ICE or TGV high-speed train to Paris, takes approximately 11 hours. Travel documents for the journey to France and for TGV trains can be purchased at all ČD international ticket counters.

You can obtain more detailed information about train journeys to France from our Search for a Connection page.

From Moravia and Silesia direct to the French Riviera

To travel to France, you can use direct long-distance trains operated by Russian Railways (RZD) on the Moscow – Nice route, which run once per week and stop on Czech territory in Bohumín and Břeclav. It is also possible to use this train to get to nearby Monaco. The trains are composed of comfortable sleeper carriages only; it is possible to board only with a pre-purchased ticket with a global price.

How Much to France

We sell tickets for the direct connection between the Czech Republic and France (or Monaco) on luxurious Russian Railways (RZD) long-distance trains e.g. for the following prices (adult passenger, T4 compartment with four sleeper berths, one-way):

All prices are set by the company FPK (a subsidiary of RZD), which operates these connections, and can change during the course of the year. For current prices and available tariffs, you can inquire at ČD ticket counters equipped to issue international tickets.

Complete offer for your trip to France

France is one of the largest and most populous countries in Europe with a long history and diverse landscapes ranging from seaside resorts to the continent’s highest mountains. Moreover, it is one of the pioneers of high-speed rail transport, and thus even a ride aboard the TGV train is an unforgettable experience.

If you visit France and skip the capital, it’s as if you didn’t see the country at all. Paris attracts tourists from around the world not only for its dominant feature, the Eiffel Tower, which was built in 1889 on the occasion of the so-called World’s Fair for a period of 20 years (and was initially considered an element which detracted from the value of the city’s panorama), but also for its other celebrated spots, for example the Louvre Palace, the Notre-Dame Cathedral, the Arc de Triomphe, the streets of Montmartre, the banks of the Seine and the modern quarter of La Défense. The Palace of Versailles is within reach as well, and you can get there comfortably from the centre of Paris using the RER suburban train network.

If you want to experience the atmosphere of the Mediterranean Sea, we recommend that you visit the second-largest city in France, Marseille. The TGV train will cover the over seven hundred kilometres from Paris in less than three-and-a-half hours. In Marseille, you can wander through the narrow streets around the port or take a boat ride to the island of If, where the Count of Monte Cristo was imprisoned in Alexandre Dumas’s novel.