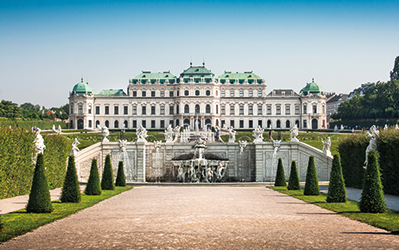 Are you travelling to Austria?

You can get to Austria several times daily aboard comfortable direct railjet, EuroCity and express trains. For overnight travel, you can use direct sleeper carriages. Connections in border regions are provided by local (Os) trains.

From Prague to Vienna every two hours

You can travel to Vienna seven times per day without changing from Prague, Pardubice and Brno on comfortable railjet trains. Direct trains run also from Ostrava, Přerov, Břeclav or Znojmo. Railjet trains run between Prague, Brno and Vienna throughout the day at two-hour intervals, and continue on to Wiener Neustadt, Semmering and Graz.

You can also use the direct overnight train EN 476/477 from Prague, Pardubice and Brno to Vienna.

By train to Linz

Linz is served by a direct train connection from Prague, Tábor and České Budějovice. In the 2016/2017 timetable, four pairs of trains per day now run between Prague and Linz.

You can obtain more detailed information about train journeys to Belarus from our Search for a Connection page.

How Much to Austria

We offer inexpensive tickets at the ČD e-shop or at a ticket counter. Within the scope of the First Minute Europe offer it is possible to travel e.g. from:

Complete offer for your trip to Austria

It is also possible to travel to Vienna and in the nearby border regions e.g. with a EURegio ticket.

Ticket prices are set in EUR. The price in CZK may change according to the current exchange rate against the euro.

Austria lies in central Europe and is our southern neighbour. It is comparable in area and population to the Czech Republic. Austria represents a tourist paradise for visitors – and it’s no wonder. Touring, cycling, hiking, skiing and rafting are all available, as well as cultural monuments and historic sites.

Austria’s capital city lies on the Danube and is home to 1.7 million people. In 2001 its historic centre was added to the UNESCO list. Visitors are attracted to Vienna mainly thanks to Schönbrunn Palace – the imperial summer residence – with its beautiful garden, St. Stephen’s Cathedral and the Habsburg castle Hofburg. Among its modern architecture, the Hundertwasserhaus development of residential homes is well-known. After a walk on Mariahilfer Strasse, Vienna’s showpiece boulevard, you can visit the Prater amusement park or the Donauturm observation tower.

The capital of the federal state of Upper Austria offers a historic centre with several churches and museums, a botanical garden, Danube boat tours and a cycling trail along the Danube.

The capital of the federal state of Salzburg on the Salzach River. Its historic centre was added to the UNESCO list in 1996. In the old town you can visit the baroque Salzburg Cathedral, where Salzburg native Wolfgang Amadeus Mozart worked as an organist. Then climb up to Mönchsberg and delight in the view of the city and the preserved Hohensalzburg Fortress. Don’t forget to taste the local culinary specialties – Mozart balls (Mozartkugeln) and Salzburger Nockerl.